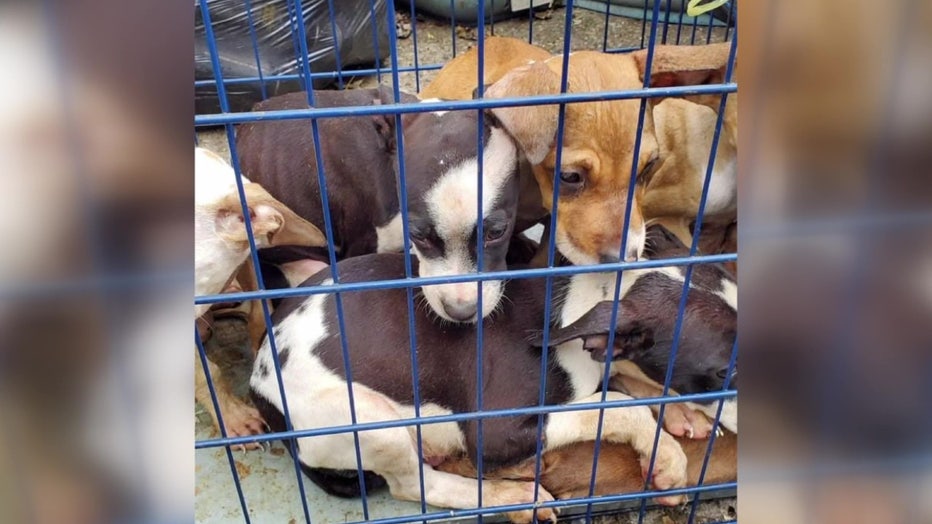 According to executive director Theresa Sumpter, the six puppies are just 8 weeks old and were dumped without their mom in the Detroit field, where they were left for several days.

Two of the dogs, Shirley and Temple, are in critical condition but Temple may not survive.

“She weighs a little over 5 pounds and she should weigh anywhere from 10 to 12 pounds right now,” Sumpter said.

A neighbor scooped the puppies up this week and called Sumpter and the Detroit Pit Crew Dog Rescue.

“All the organizations in Metro Detroit area are overwhelmed with returns and the same type of calls,” Sumpter said.

They’re getting overrun, specifically with dumped dogs and people who are either being evicted or just can’t take care of what once was a cute little puppy but turned into a 60-pound dog. She told FOX 2’s Jessica Dupnack that people are abandoning their COVID-19 rescues.

“We saw a lot of people stepping up and they wanted to adopt. They were staying home during Covid – maybe working from home but now we are seeing a rebound from that. We’re seeing the opposite,” she said.

Four of the six from the litter rescued are doing well and have been placed in foster homes. Sumpter said Shirley and Temple are getting 24-hour care from a veterinarian. She’s urging people to think before dumping dogs.

“They think they can put these animals out and they are animals and they are going to hunt for food for themselves. That’s not the case. These are domesticated animals that rely on us humans to feed fro them and to care for them,” Sumpter said.

If you or someone you know can no longer care for your animals because of finances, please call your local animal control. There’s help out there so you don’t have to give up your dog.

A neighbor scooped the puppies up this week and called Theresa Sumpter and the Detroit Pit Crew Dog Rescue.