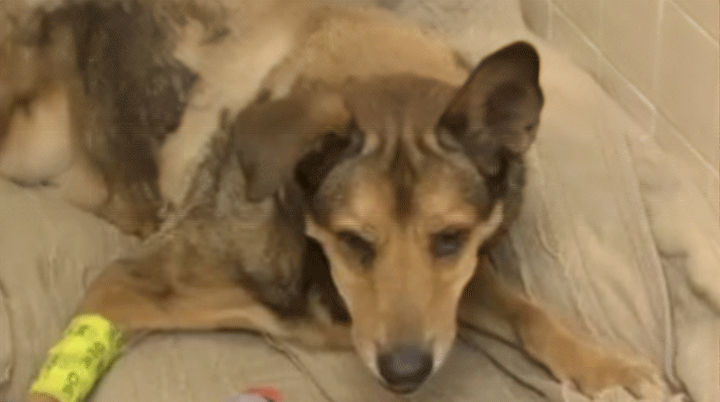 A Detroit dog was recently rescued after being found beaten and dragged behind a bike.

But a lot has changed for the German Shepard mix now named Justice. He’s making a recovery and has a new, loving home with special ties to FOX 2.

Photographer Keith Hornberger and his wife, Nancy, welcomed a new member to their family – Justice.

“We’ve had him for five days and yep he’s a Hornberger,” Keith said.

The 7 or 8-year old dog is appropriately named Justice after being found abused.

“You look at that face and I just can’t believe anybody would hurt him,” Keith said. “It just breaks my heart.”

Only three weeks ago Justice was barely able to stand.

The German Shepard mix was beaten, and dragged from a bike by an extension cord. Witnesses finding him on Detroit’s southwest side unconscious.

“What motivation would you have to hurt this dog? I just don’t get it,” Keith said.

The Detroit Pit Crew out rescued Justice, then featured here on FOX 2.

“When I saw him I texted Keith, if this dog doesn’t have a home, we have to do something, we have to get this dog,” said Nancy Hornberger, Keith’s wife.

Justice, with his fur ripped out, an old bullet inside his abdomen, hearing loss and arthritis. But now he is safe and sound in the Hornberger household – and he seems much more like a puppy.

“He has just flourished,” said Jill Smith of the Canine Companions Rescue Center. “He’s curious. He’s a different dog than the dog we first got.”

“Within days, his whole personality started coming out,” said Nancy.

Justice is now with his own toy box, a sister to play with, and three walks a day.

Although two arrests have been made in his case, the men were released. The Wayne County Prosecutors Office says Friday — they need more evidence.

“We always hope somebody will be held responsible for hurting an animal,” said Theresa Sumpter, Detroit Pit Crew founder. “But it looks like this case that may not happen.”

Justice may not get it, but is ending up in a happy home.

“This is what makes it worth it,” Sumpter said. “Because we know we saved a dog that will now have a happy life from here on.

“No harm will ever come to Justice as long as I’m breathing,” Keith said.

The Hornberger family is now complete. Keith and Nancy thank those Detroiters who called police, the rescues and veterinarians involved in saving their new furry family member.

“Without all of them, he wouldn’t be in our lives,” Nancy said. “He would not be here.”

Every donation matters. If you would like to help out these rescues and in turn help dogs like Justice donate to Detroit Pit Crew: